Like a rollercoaster as the last car eases over the top of the hill, we are hurtling forward after what felt like slow movement. The projects that we have been working on for the last three years are picking up speed. We have said all along that the way to change cancer research is through greater collaboration, and that message was loud and clear at this month’s Cancer Moonshot Summit at Howard University. There was an extremely diverse group of cancer research advocates brought together to hear Vice President Biden’s ideas and then work together to share our own ideas for how to bring about 10 years worth of change in the next five years. I think that idea might have scared some people, but we have already seen amazing advances using the Cavatica platform, so we know that kind of rapid improvement is possible.

I know that there were many events held around the country, and we even hosted an event at WSU in Wichita, but many of you may not have had a chance to really see what happened during the day of the Summit. I wanted to give you my perspective on the day, and I hope it fills you with the kind of hope I have for the future of cancer and disease research.

We started the morning with American icon Carol Burnett. She was delightful, as always, and the fact that she took the time to be there with us spoke volumes about how amazing this effort really is. Vice President Biden shared some of his frustration with us over costs and lack of progress, and we learned about some of the goals of the Cancer Moonshot initiative from Dr. Danielle Carnival, Chief of Staff and Senior Policy Director of the Cancer Moonshot Task Force.

There were several other speakers, all of whom underscored the need for this important gathering and continuing effort by the community. We broke into work sessions for the morning, and I was placed in the “Solving the Technical Challenges to Unleash the Power of Data” group. That was no big surprise!

I was incredibly humbled by the people in my workgroup. From industry veterans who have been working on making genomic data available like Warren Kibbe to bright, young innovators like Daniel Wagner who are challenging the way we look at and access the data. It was a fast-paced discussion that resulted in some great ideas.

We all returned to the general session for lunch where we could share ideas in a less-formatted way. I had the great pleasure of sitting with Dr. Charles Powell from the Icahn School of Medicine at Mount Sinai. Our discussions covered everything from rare forms of Mesothelioma to the latest imaging technologies. There’s nothing quite like watching a doctor get a look at new technology that will help him do his job more effectively, and I had the pleasure of watching that at lunch. It is simply amazing what we are gaining access to through new technologies. We got a great look at how Siemen’s is turning analog scans into digital data that can be used for comparative analytics. That will be great in Cavatica!

After lunch, we heard some great speakers who spoke about collaboration. I think some of these were available on the live broadcasts, and they are available for viewing here:

Then we were off to our afternoon workgroup sessions. My session was on “Data: To What End?” and our insightful speaker to start the session was none other than David Agus. 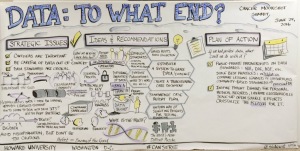 We talked about existing collaborations, and I finally had a chance to mention Cavatica, the sharing platform we have been funding. The attendees seemed a little stunned that we already have 10 hospitals not only sharing digital data, but biosamples as well. There was still some sentiment among event attendees that it would be hard to get scientists to share their pre-publication data, but the doctors at the 10 Cavatica institutions are truly putting children, and indeed all humans, first. This level of collaboration may be unprecedented, but it is the wave of the future and that was evident from the number of people looking to learn more about our platform. I was so honored to be able to share about the many hospitals and nonprofits who have come together to build this amazing resource. I believe it could be the model by which all future research is done.

After a pretty exhilarating working group, we returned to the main hall to hear Greg Simon, Executive Director of the Cancer Moonshot. Dr. Adam Resnick and I got to speak with him for a few minutes after the event was over, and I felt like he was truly trying to pull together all the resources he can to make the end of cancer a reality in our lifetime. 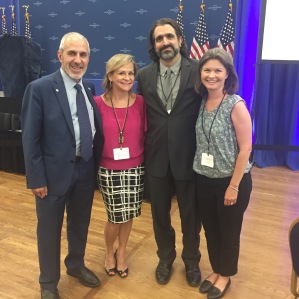 The event ended with Dr. Biden and the VP Biden speaking to the crowd and asking for a prolonged commitment to working together for cures. I believe we have that commitment from everyone that attended this important event.

We returned home to find out that we have been accepted into the Revlon “Love Is On” Challenge. This is an amazing opportunity, not only to raise much needed funding for the research platform, but also to raise awareness for the platform and explain how it can improve research around the world. You’ll be hearing a lot from us about this, but there are two things you can do right now to make a huge difference: